People probably get tired of me going on about my obsession with writers named David. I have a tendency to be a broken record with things I love. Sedaris. Foster Wallace. Rakoff. I recently read books by a Farley and a Lipsky that were both also excellent (though to be fair, the Lipsky book was a transcript of a conversation with Foster Wallace…)

A year ago today, David Rakoff died, so I hope you don’t mind if I let my record skip a little longer…

I met David Rakoff once, in February 2011. Just for a minute, at the end of an event in Brooklyn. I hadn’t read his books yet, I’d only heard a few of his pieces on This American Life, and his rhyming couplets stuck in my mind – mainly because I hate rhyming couplets, and yet the two poems I’d heard him read on TAL were beautifully crafted and erudite. They were touchstones of how to live gracefully in this awkward and fragile human world. At this event, I was ogling Ira Glass (like you do), trying to get a picture, and I didn’t take the time with David that I should have, that I would have if I had already fully immersed myself in his canon the way I have since. But while Ira was running around, trying to get something done, David looked at me fully, he was present with me. I had the strangest feeling that he would have gladly been a friend and mentor to me, if only I had asked.

Little did I know at the time. Once I read his books and listened to more of his TAL work, I often thought of writing to him, of telling him how much I identified with his work, but I procrastinated. And now it’s too late. When I read that he died last year, I burst into tears, and then kept bursting sporadically throughout the day. I felt like I knew him, even though of course I didn’t.

I’ve been thinking about that a lot lately, about how nonfiction writers who insert themselves into their work shape who they want you to see – so that you can feel like you know them, like they understand you as no one else ever has or ever could, like you could really truly be friends. That’s a gift, though a somewhat disingenuous one. Who knows if these writers truly are what they say they are…well, I guess that could be said of anyone.

The thing about the Davids is this: Foster Wallace is just brilliant. He elevates me, challenges me, and yes, seems to worry about the same things I worry about as far as what it means to be human, or lonely, or connected. He had so much roiling inside him, no matter how much he struggled, it seems like it just couldn’t NOT get written. Sedaris was born into a family just begging to be written about, which is not to diminish his talent, because he uses his own special alchemy to embellish his familial lore into art.

But David Rakoff is me. He had to fight for his words. He wasn’t born into a goldmine of stories, though I suppose being gay – and a Canadian in America – gave him some inherent material. But this is the man who said, “Writing is like pulling teeth. From my dick.”

I so perfectly identify with that sentiment, relevant body part or not. It seems like David got a later start in his writing because he was afraid to try for many years. He had to go out and find stories, he put himself in weird situations, he did things he didn’t want to do. He forced himself to experience, and grow. Often the endgame was disappointment or indifference. But he tried.

I live in “afraid to try.” I’m still working on getting to “tried.” I admire the journey he took from one to the other. I get it so hard.

That’s what it seems like he did, anyway. That’s how he presented himself, or a facet of himself. And if he exaggerated that part…well, he made himself completely human. I wanted to know him better. I don’t know if that’s dark magic or not, but if only I could get that kind of emotional truth right.

People always tell me I’m too hard on myself. Someone suggested that I imagine a child, or a pet, or something that I would always treat gently, and try to treat myself like that.

I am on the fence about babies and I have never had a pet, so instead I imagine David Rakoff. I think he might have been a little hard on himself too. And he is certainly someone who deserved to be treated with generosity and kindness. In the minute I met him, he gave that to me.

Writing is like pulling teeth. But when I get frustrated and want to give up and find a nice 9-5 job and never, ever think about being creative again, I think of David, who can’t write anymore. I imagine taking up the torch for him. I can’t pretend to be a fraction as smart or witty as he was. But I can continue to make myself better, to strive to get where he was, and to honor him by emulating him, by writing the kind of stories he might have written.

Anyway, that’s just how I feel. Go read his new book, it’s all rhyming couplets, and I’ve heard it’s amazing. I’m putting it off, delaying the gratification, but you should buy it.

The world misses you, David. 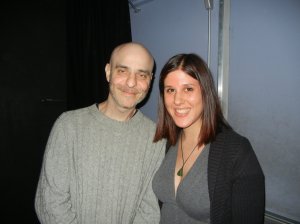 In 2012, I set a goal to read 50 books; I read 59, which was a full 30 more than I had read in 2011. I was thinking I should do a sort of year in review thing, but the problem is I probably only read 5 books published in 2012. Most of them were just pulled from my never-ending list of recommendations and impulse-buys from Strand. I have no comprehensive view of “The Year in Books.” Now that the real experts have released their top 10 lists of the best of 2012, I’m just adding to my to-read list exponentially.

I read a good mix of fiction and nonfiction – 32 to 27. My favorite book of the year was, surprisingly, The Road, by Cormac McCarthy. I hated the film of No Country for Old Men so much I assumed I would hate his books. I finished The Road in 2 days, put it down, and cried for 10 minutes. That is the test of an effective book, if it can move me to some sort of visceral response. It’s very rare.

This year I discovered David Foster Wallace and read three of his books. I’m grateful to still have so many to slog through, but I take it very personally that he committed suicide 4 years ago. How dare he deprive the world of his genius? And that’s the thing: he’s clearly brilliant, with a mind that can comprehend depths and worlds beyond my understanding, but when I read him I always feel a level of humanity and generosity. He seemed like the type of person I could argue with about silly things. I desperately wish I could have been his friend.  This is again, a rare find, a writer with such a personal voice that you can really identify with.

I continued my march through David Sedaris, and am down to one unread title. He best publish a new book soon. I found Bill Bryson, a funny travel writer whose voice is also unique. If you haven’t read Born Wicked by Jessica Spotswood yet, I suggest you do, because Star Cursed, the next installment in the lives of the Cahill sisters comes out in June and I can’t wait!

I read some big best-seller titles like the Fifty Shades and Dragon TattoobBooks. Usually I find them “meh,” but fast and entertaining. I read some books by lady authors – essays, memoirs – and tried to pin down the secrets to their success: Nora Ephron, Tina Fey, Sloan Crosley (whom I really didn’t like, but I still don’t quite understand why.) I read a novel called A Short History of Women by Kate Walbert that I got bored with in 2011. Upon giving it a second chance I would put it in my top 15 books of 2012. Funny how you just have to be in the right frame of mind sometimes. It’s a very zen thing, bringing the right book into your life at the right moment to appreciate it.

There were certainly some disappointments. I read Swamplandia! by Karen Russell because it was nominated for a Pulitzer last year. I really did not like it – have any of you read it and enjoyed it? I didn’t like the structure or care about the characters. I read Americana by Don DeLillo, who is one of my favorites, but man did I NOT enjoy this one. There’s a weird feeling of betrayal when you don’t like a book by an author you love. Most of my travel writing books I really enjoyed, which just shows where my head is, though I feel like I didn’t read as many of these as I intended to this year, having been derailed by classwork. I also need to make a more concerted effort to read the classics – I think I only got through one or two this year. I reread the Sally Lockhart mysteries by Philip Pullman, which I remembered having such a strong reaction to as a teenager, and it’s funny, I can still feel exactly that reaction and where it happened, but in a detached way…the painful reality of growing up and losing your ability to get swept up in a bit of romance.  While I’m still not good at completely letting go of finishing a book once I start it, I am better at taking breaks during the crap books so I’m not stalling my reading altogether. This is why I read so few in 2011 – I kept trying to read things I didn’t want to read and then I just wouldn’t read at all.

This is a terrible strategy. There are too many books in the world to not always have one engaging you on your nightstand or ready for a commute in your purse. At this very moment, I have 35!!!!! purchased, unread books on my Kindle and bookshelf. 35! And I am stuck in that bad place where I “have to” read things again, between school and my part time writing gig. I’m trying to sneak in books I’m excited about between those assigned just to remember what a joyful intelligent form of escapism reading can be.  When I am deeply involved in a book, it’s all I can do to force myself to do anything besides read it.

Sometimes it keeps me awake at night worrying about how I will ever read everything I want to read in this lifetime. There are just too many books to be excited about! My goal is to read 75 this year, which seems lofty and unmanageable but I am determined to try. Despite my 35 books ready and waiting, I’m curious about what you read and loved this year. I love adding new books to my ever-growing stack. Excite me, people. I am always ready for a good mindblowing escape.